At 10.30am Des Graham, Principal Director of Music of the Third Carricfergus Band welcomed everyone to the concert and introduced the impeccably dressed training band and current Brass Band League of Northern Ireland Junior Band Champions along with their respective conductors, Robin Clinton (Training Band) and Peter Arthurs (Junior Band) to the stage.

To an audience consisting of proud parents, relatives, tutors and senior band members, the combined bands opened the very well attended concert with a rousing rendition of the famous march "Slaidburn"

The concert then continued with each band showcasing their talents under the batons of their respective conductors with a selection of entertaining pieces being played by all concerned.

As a result of the improving standards that are clearly visible throughout the junior bands, this year the concert featured no less than 3 soloists and 1 duet, a first for the annual junior band concert.

The morning's entertainment was concluded when both bands again combined to perform a selection of well known pieces which had the audience smiling and tapping their feet.

After the concert came the awards, with the prizes being given out by the band's special guest, Mr Ivor Stevenson, from Armagh Old Boys' Silver Band and chief organiser of the annual Brass Band Summer School in conjunction with the Fodens Band. The band would like to thank him and his wife for their attendance and continued support and interest in the advancement junior players.

The band would also like to thank all those who attended the concert today and hope that you will continue to support the players of tomorrow. Thanks also to all who supplied and served tea and buns. Last but not least special thanks to Peter Arthurs, Robin Clinton, Des Graham and all the other tutors and helpers without whom this excellent work could not take place. 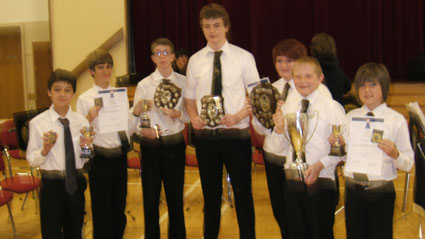 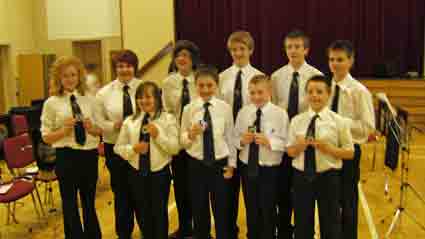 Congratulations to all winners, runners up and all players involved today. Keep up the excellent work.