Larne Choral Society's Spring Concert in First Larne Presbyterian Memorial Hall recognised the area's maritime inheritance with a selection of music entitled "Songs of the Sea" in which the choir demonstrated its breadth and depth of expression under the expert guidance of their conductor, Elaine Hawthorne accompanied by Gwen Dick. 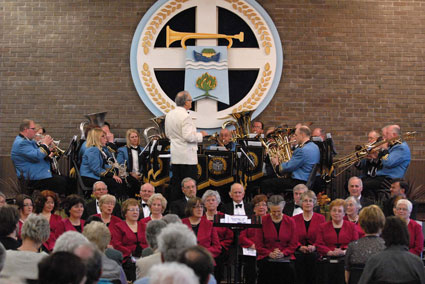 "We are the Choir" set the tone for the evening, and the haunting "Moon River" was warmly received by the enthusiastic audience. "By Waters Clear" and "The Skye Boat Song" slowed the tempo and the humorous "Songs of the Sea" compilation had many a foot tapping.

The atmospheric "Nella Fantasia" brought an Italian flavour to the evening, while the tenors gave a sound rendition of "When I Was A Lad." The hugely popular "Bridge Over Troubled Water" was beautifully executed and "Away From The Roll Of The Sea" and "Beyond The Sea" provided a suitable finale for the evening.

The choir sang with skill and confidence and conveyed their enjoyment and enthusiasm throughout the programme.

Also taking part in the concert were soloist Diane Petherick (soprano) and the Third Carrickfergus Band conducted by Desy Graham.

Diane Petherick's beautiful interpretation of "All Things Bright And Beautiful" and "The Lark In The Clear Air" were warmly received by an appreciative audience. She further entertained with "Rejoice", a song from Katherine Jenkins' eponymous album, and completed her competent performance with a stunning rendering of "Wishing I Was Somehow Here Again" from Phantom of the Opera.

The Third Carrickfergus Band demonstrated superb musicianship and interpretation of a wide variety of pieces, including Rossini's "The Barber of Seville", African Funk, Titanic's "My Heart Will Go On" and "Largo Al Factotum" in which Peter Graham's Euphonium solo showcased his and the band's expertise in a wide variety of musical genres.

Elaine & Gwen's duet from The Pirate's of Penzance went down a treat and the catchy nature of the piece had the audience's feet tapping. David Hawthorne provided appropriate percussion and Ellen Fleck entertained the audience on the harp at the beginning of the concert and during the interval.

[Article taken from the Larne Times]