In May 2005 the band were given the wonderful opportunity of competing in the European Brass Band Championships in Groningen - Holland. The band flew from Belfast International Airport on Friday 29th May 2005 at a ridiculously early hour. Upon arrival at our hotel we had 20 minutes to unpack and attend a specially prepared tea before heading off to rehearsals which were held at the local police headquarters building, where we were able to use the practice rooms used by the Groningen police band. After a gruelling rehearsal we returned, exhausted, to the hotel for a nightcap.

The following morning we had another early start, arriving with anticipation at the concert hall, nerves tingling. Our first look around the stage area was something else as we struggled to see the back of the hall. This was by far the biggest arena most of the band had ever played in. 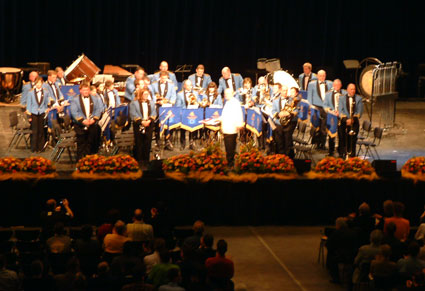 With military precision we were escorted from our dressing room to our practice area for a final warm up and some last minute adjustments. After our allocated time we were then ushered to the wings and awaited the big moment. The introductions completed we entered stage right to a fantastic audience, got ouselves settled and off we went. Our programme running order was;-

After the performance the band headed off in all directions, some returning to the arena to watch the remaining bands in the section, some heading for the local eateries and others, despite it being barely afternoon, required some liquid refreshment. 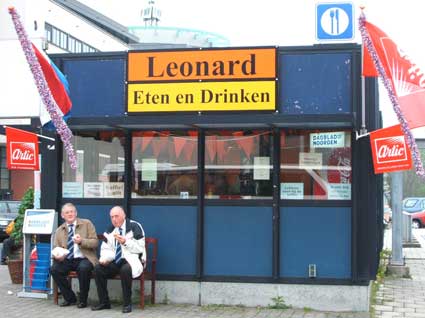 Most of the band then returned to listen to the performances in the championship section including the brilliant Black Dyke Mills band playing their own choice work and premier of Peter Graham's Journey to the Centre of the Earth - a fantastic piece of music, masterfully played and earning a deserved standing ovation and a rightful 1st place for the world famous band.

Tickets had been provided for the whole band to attend the enjoyable evening concert, the highlight being the band who played while cycling round the arena. Quite an amazing feat especially for those of us who struggle to play while sitting stationary.

After the concert it was off to the competitors party to celebrate the ending of a memorable weekend. 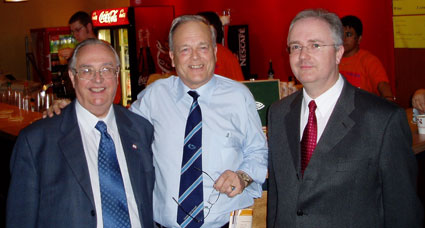 Another early start on Sunday morning for the return journey, which was somewhat quieter than the outgoing one - possibly something to do with the fact that some band members had only returned to the hotel half an hour before the coach was leaving, having managed to somehow party all night around the nightspots of Groningen - oh to be young again.

Overall, the weekend was one to be remembered and talked about for many many years to come and although we were not placed in the competition, there are not many bands anywhere who can say that they have performed at the Europeans.