This year, the Third Carrickfergus Band tragically lost one of its rising stars in terms of playing, conducting and youth development after an unsuccessful battle against brain cancer at the very tender age of 36 years.

Peter had played with the band for over 25 years emerging to become one of the best Soprano Cornet players in the country helping Third Carrick to multiple contest wins and Band of the Year titles along the way. He graduated from the University of Ulster in 2003 having attained a BMus (HONS) degree and went on to teach children both privately and in several local schools (particularly Carrickfergus Grammar School) and then also became conductor of the Third Carrickfergus Youth Band taking them to many successful contests in the developing Youth Movement within the NIBA.

To mark his passing the Third Carrickfergus Band have established a bursary for youth members of the band who wish to pursue a career in music, a fitting tribute to his legacy!

The first recipient of the Peter Arthurs Bursary was young trombonist Jessica Montgomery. At an event held after a recent rehearsal Band Chairman Tim Glover congratulated Jessica on her achievement on being accepted as a Junior Entrant to the Corps of Army Music and will head off shortly to study firstly at Harrogate then at the prestigious Kneller Hall in London, the Royal Military School of Music. The bursary was presented by Peter's wife Gillian. Also present were Peter's mother, Betty and sister Cathryn. 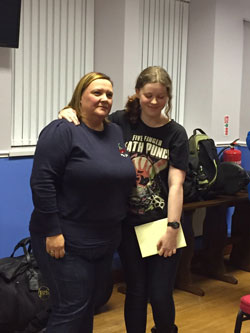 The Third Carrickfergus Band wish Jessica every success as she embarks upon her career in music and look forward to receiving updates on her progress in the coming weeks and months.