Only a week after Black Dyke performed in Strabane, we were again treated to a fine performance of music from an "In Form" Fodens Richardsons band. The concert took place on Saturday 9th February 2008 in the The Market Theatre, Armagh and featured an excellent programme of music to suit all tastes and included some excellent soloists, the highlight being the euphonium maestro that is Glyn Williams whose musical dexterity playing every instrument in the band, and even the kitchen sink, was astounding and supremely entertaining. Overall, this was a fine concert from a great band under the well controlled direction of conductor, Mark Fowles. 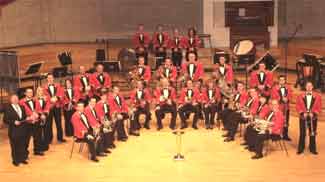 Earlier on in the day, the Fodens band accompanied no less than 35 junior soloists from various bands around the province, including 6 from our own band in a hugely successful afternoon concert. This will prove to have been a great experience for all the junior players involved and is a great credit to the work put in by the individuals, bands and most of all to the dedication and time given by the Fodens Band in their quest to assist in the further development of the up and coming bandsmen and bandswomen of the future. A huge "Well Done" to all who took part in the afternoons concert especially, of course, to our own 6 players who did us proud and proved that all the work done by the junior band and it's tutors is beginning to pay off.

Huge congratulations must also go to Mr Ivor Stevenson of Armagh Old Boys Silver Band for his tireless organisation of the whole event with his usual infectious panache and charm and all of the people who assisted him in the background.

Full details of the evenings concert programme are noted below.