On Friday 1st and Saturday the 2nd June 2018 the Third Carrickfergus Youth Band completed their annual weekend of music-making and prize-giving in the War Memorial Hall, Lancasterian St. Almost 30 young people from around the borough and beyond gathered for a full weekend of brass band music, learning, fun and games culminating in a concert to parents and guests finished off with the Annual Awards Ceremony. 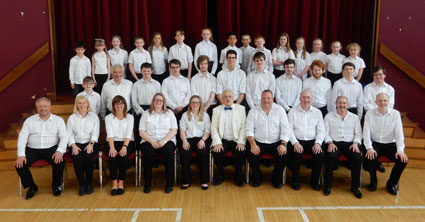 The Youth Band meet every Saturday morning during school term time and comprise of children from the ages 7 to 18 years (plus a small group of willing and able adults) with instruments and tuition provided by the Third Carrickfergus Band. This year instead of a guest conductor/tutor the entire weekend was coordinated and directed by the evergreen Des Graham (where does he get the energy and motivation from!) along with his trusted group of volunteer tutors from the Senior Band. A varied and challenging program of movie themes, marches, hymn tunes, coupled with several very fine soloists, was presented to the audience on Saturday afternoon.

This year was particularly poignant and special as it marked the first anniversary of the passing of the former conductor of the Youth Band, Peter Arthurs who tragically passed away just after the 2017 Youth Band weekend at the tender age of 36 years! To mark the occasion his family presented a wonderful and fitting trophy designed and manufactured by Peter's father David in honour of Peter's contribution to the Youth Band over the years. The inaugural winner of the trophy was one of Peter's former pupils, Jamie Wharry, who very graciously accepted the trophy from Peter's mother Betty. 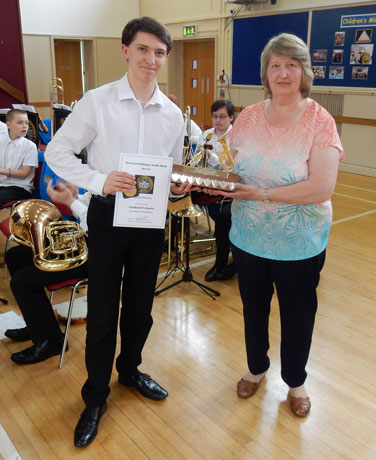 The band would like to take the opportunity to pass on their congratulations to all the winners, runners up and anyone involved throughout the year and weekend. Preparation for next year's concert starts in September 2018 and the band is always on the lookout and welcoming to new recruits. It's worth pointing out the importance of music and the arts and the positive impact this has on the academic side of the brain. For a token charge of &pound1 per week the young people of the Third Carrickfergus Youth Band get a brass instrument and expert tuition throughout the school term along with the requisite structure and discipline that will help them develop into well rounded young adults. Feel free to contact the band via our website if interested in joining. All welcome!