Michael Montgomery, the bands solo horn player was given the opportunity to play a solo with the multi award winning Foden's Richardson Band under the musical directorship of Derek Broadbent during their visit to Armagh on Saturday 3rd February.

Michael gave a superb performance as he played the beautiful Goff Richards arrangement of Over The Rainbow (Arlen & Haburg) from The Wizard of Oz to an appreciative audience at the Market Theatre in Armagh city. 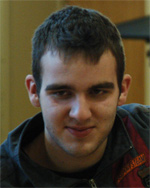 This was the 7th visit to Armagh by the current English National champions who, in addition to performing in concert to full venues, have given a huge amount of their time and expertise as tutors during the annual week long summer school organised by the Armagh Old Boys Band in August each year.
Back to the list